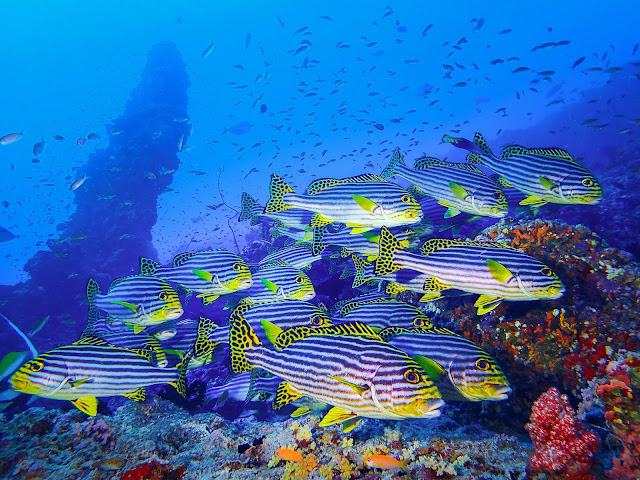 I think "sublime" is the word that best describes diving.

I remember first learning about the notion of sublimity in junior college, when we spent a year exploring Romantic and Gothic literature. One of the hallmarks of Romantic literature is the celebration of the natural world; Gothic literature, on the other hand, revolves around the wild, the terrifying, and the uncanny. The common thread tying these two genres together is the rapturous grandeur of emotions that nature - the utmost source of sublimity - elicits in the characters and readers alike.

It's hard to think of another word that describes diving so perfectly. Close your eyes, hold your breathe, and imagine -

A world that is quiet and grey in its vastness. You float, you and a mere handful of others, in the middle of this edgeless, desolate cosmos, and then with a muted nod at each other, you slip silently beneath the waves.

The exultant freedom of being underwater, a space where you can navigate with ease one more dimension than you were created to master. A space to which you're alien, but one that embraces you wholly and intimately, immediately.

This time close your eyes underwater as well. Feel your breath, feel your weightlessness, feel your vulnerability. Then open your eyes and look at your hands. Clench your fingers, release them; marvel at your human-ness and how perfectly designed you are.

And lastly, imagine, if you can -

The countless wonders and mysteries that must exist just outside the bounds of your vision and your mind. 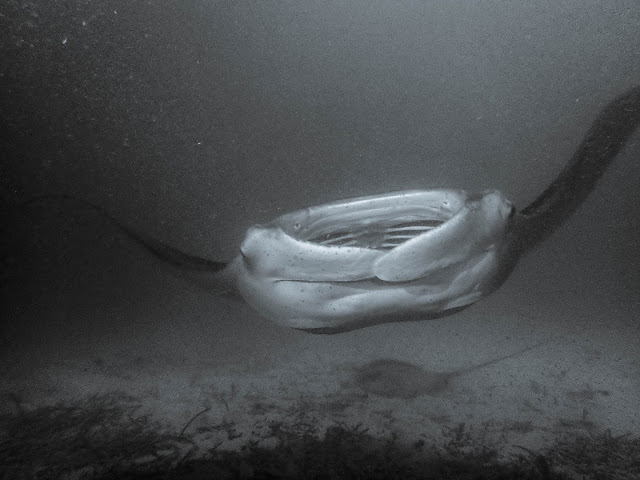 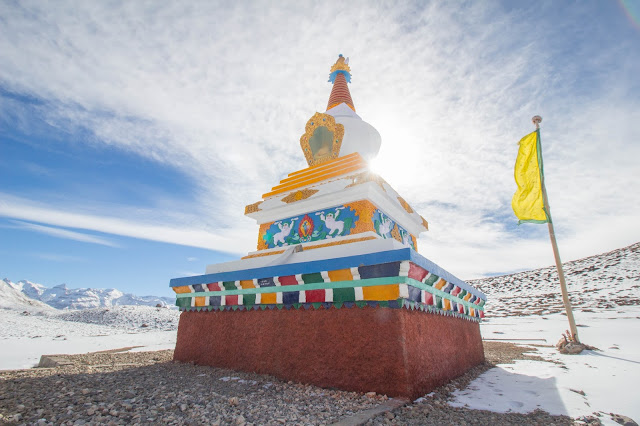 "There!" Tenzing hisses, pulling us into a squat so abruptly that I almost lose my balance.

It is our seventh day in Spiti Valley, and we're trekking back to lower ground. Yesterday we spent the night in Komic, one of the highest villages in the region at almost 4,600m, where we unexpectedly found fossils of ancient sea creatures in a bed of loose rocks. (The Himalayas used to be part of the Indian Ocean before plate tectonic movements pushed it out of water two hundred million years ago, so this belt is particularly rich with fossils of sea animals and plants.) We heard that scores of people camp here in the summer to hunt for fossils, so I suppose we were luckier than most - we found ours when we were idly kicking stones around during a water break.

Before Komic we also passed through Hikkim, yet another high-altitude village that is home to the highest post office in the world. Our guide, Tenzing, joked that pretty much everything in this area is the highest something in the world. This claim to fame, like it or not, comes at a price - life in the mountains is so harsh and difficult that you can see it in the deep-set wrinkles on the locals' faces, and in the strength of their browned, rugged hands. Around the central fireplace one cold night, we asked our home-stay host what keeps everyone in this village? The look in his eyes as he answered spoke volumes. Poverty is one reason, he said, his resignation tempered with pride and warmth, and also because of the community here. We all know each other and help each other, and when the nights are cold and long, we hold parties to celebrate. I wonder if we all lost something important when we moved into the cities.

Then on Christmas, we passed through the picturesque village of Kee, a messy collection of straight-edged Tibetan-style houses on a hill, topped by the biggest monastery in the Valley, Kee Gompa. Kee was a personal highlight for me - in fact, a picture of Kee that I chanced upon last year was the sole reason I had decided to trek in Spiti Valley. Look at this photo and tell me it isn't the most beautiful village you have ever seen! 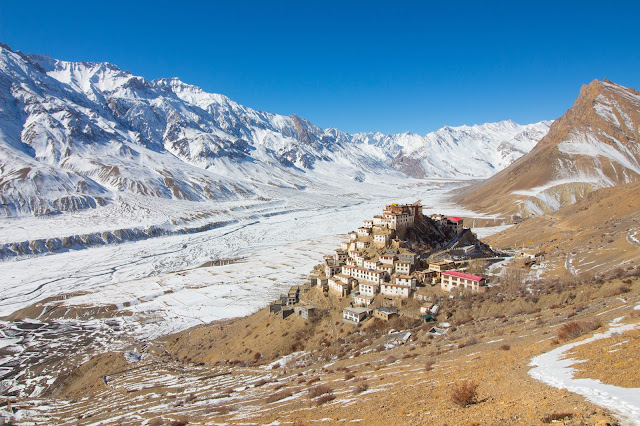 Getting into Spiti Valley though, isn't as easy as you'd think it is. Because Tibet lies just a few hours' walk away, and border skirmishes are not uncommon, security in this region is immensely tight. There are military outposts and checkpoints everywhere. An official at the permit office also told us that because of the conflict, it is extremely difficult for China nationals to be granted permission to trek in this region.

Then there is the matter of the roads. In order to get to Kaza, the gateway to Spiti Valley, we had to drive for eight long hours on roads that were freshly hacked out of the sides of the mountains. Excavation is still on-going in many sections, so the surfaces are hardly smooth, and the cliff faces at the side are oftentimes so raw that I subconsciously braced myself for a rock-fall at every turn. A friend of mine who had ridden through Spiti Valley with a motorbike gang said that someone in his group had actually skidded off the road and down the mountainside. The poor soul hadn't survived, of course, and the rest of them had had to scramble down to retrieve his body. I was extremely relieved to make it through with nothing more than a sore bum and a nose-ful of dust.

Today, we're finally three-quarters of the way through our trek, which means we can almost feel and taste luxuries like hot showers and buckets of Kentucky Fried Chicken. I'm busy smacking my lips at the thought of all that food, which is why I practically walk into Jared and Tenzing before I see what they've been observing for a while: a dead yak.

It's sprawled in an awkward, dark mess at the foot of the opposing cliff, barely two hundred metres away from us. Its head must be facing away because I can't make out where it is; the only distinguishable features are its spindly legs, and a large reddish patch on its side. Without much though I assume it's a blanket that its owner had once given this poor beast.

"Maybe it fell," I say. The trails here are treacherous with ice this time of year; we've each taken a spill on our bums at least once. Tenzing just looks thoughtful as he moves off.

Twenty metres on, and he suddenly freezes again. Then he grabs us, pulling down hard on our arms as he falls into a tense crouch. My bewilderment vanishes in a split second as I read his lips: SNOW LEOPARDS! 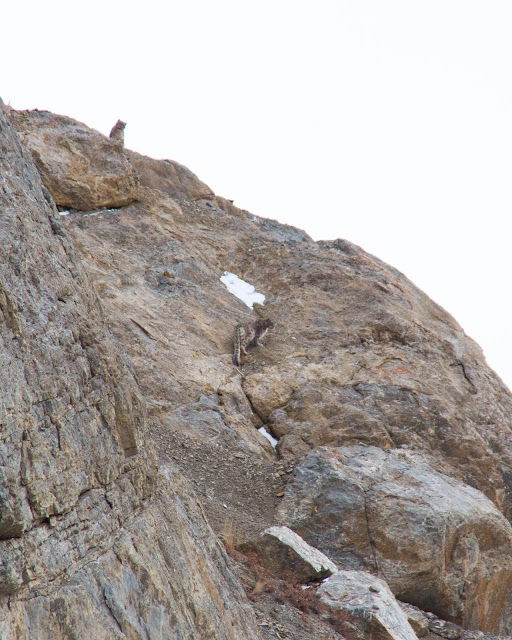 To put this in perspective, there are only an estimated twenty-five to thirty leopards in this region - a population density of less than one per hundred square kilometres. (Knowing this fact meant that I had, rationally and unfortunately, decided not to pack a telephoto lens for the trek!) The small population is a result of man's encroachment into their territories. Thankfully, after the introduction of several conservation programmes in recent years, there are indications that the leopards' numbers are on the rise. Local attitudes have also changed, with people now considering themselves lucky to see one. In one famous incident in 2017, an entire community came together to care for an old snow leopard that had wandered into their village, before cremating it when it finally died.

The two snow leopards Tenzing spotted are standing on the face of the mountain opposite us. A narrow valley separates them from us, so we are not afraid of an attack. In any case, snow leopards are known to be the least aggressive to humans out of all the big cats, and have been seen to even abandon their kill when threatened.

Even at this distance the leopards' coats are visibly luscious and full. Their tails look especially thick and fluffy, with a row of diamond-like spots patterned down their lengths. Both leopards hold our gaze as they stride uphill slowly. "Blood," Tenzing says in a low voice, and my mind immediately returns to the redness we saw around the dead yak. "They walk slow because they are sleepy from drinking blood, or maybe they are old."

The leopards continue to make their way up the mountain at a leisurely pace, though there is a wariness in their steps that belies their nonchalance. At one point, they stop and stare at us - perhaps willing us to go away, but we hold our ground, frozen to the spot by a blood-thumping mix of excitement and awe. Have you ever experienced one of those moments when everything seems fast and slow at the same time? I feel like I'm so focused that I can see in slow-motion every twitch the leopards make, and yet, before I know it, the leopards are at the crest of the mountain, and they disappear with one last look over their shoulders at us. Then the spell is broken; the cold hits our senses with renewed vigour, and we reluctantly fall back into rank for the rest of our descent.

The Mountains are Calling and I Must Go 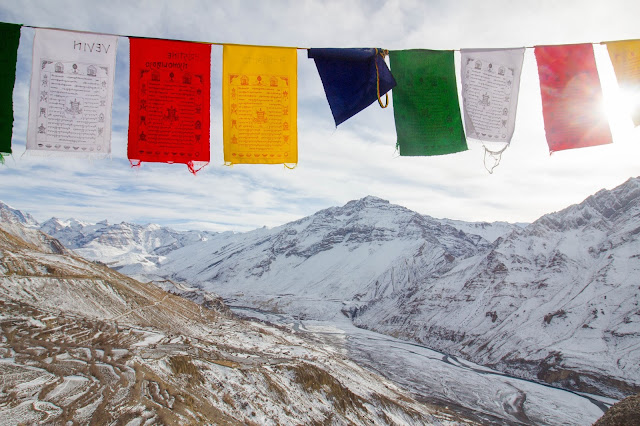 The air is cold, so cold and dry that every inhalation makes my nostrils hurt. The scarf warms my breath a little, but it comes at a price - I can smell the exertion of the past eight days in the yarn, a stale mixture of sweat, mucus, saliva.

The first time I trekked at altitude, I cried. I hadn't imagined that walking could be so difficult. But up here, the mountains don't care if you live or die. They're silent against your tears. It's you against the world.

I can hear my heartbeat, fast, loud, hard, in my ears and in my chest. I haven't been able to eat anything more than instant soup down the past few days, and I feel the beginning of a headache stirring behind my eyes. I'm tired, and hungry, and my clothes are hanging looser, but I'm acutely aware of each breath I take, the way it rushes down my windpipe and fills my lungs. And so, despite it all, I feel strangely Alive.

Do you feel most alive when you're pushed to your limits?