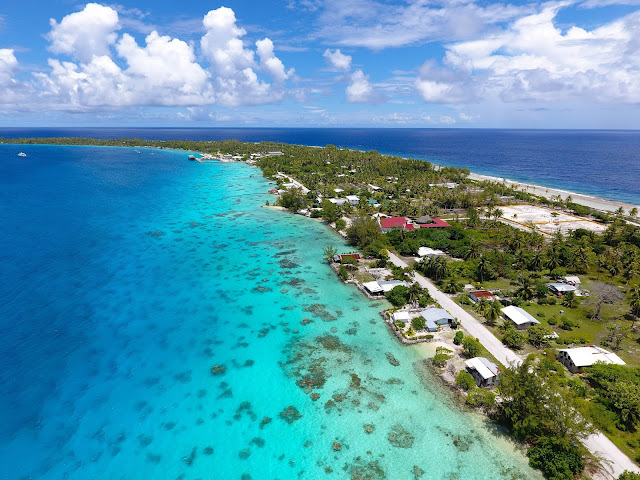 In the Arabic folktale Ali Baba and the Forty Thieves, the protagonist stumbles upon a cave that a group of thieves is using to hide their loot. The mouth of the cave is sealed by magic; by chance, Ali Baba overhears the password that opens it and manages to sneak in. He's astounded to find that the cave is overflowing with all kinds of treasures, from bags of gold coins to bales of silk and brocade.

The original Ali Baba's Cave may have been somewhere in the Middle East, but deep in the South Pacific, the atoll of Fakarava has its very own version as well. And just like its namesake, the Cave in Fakarava doesn't yield its secrets easily - it's patrolled by sharks and hidden behind a labyrinth of underwater canyons.


"One, two, three, go!" Vincent shouts, voice muffled by his regulator. We back-roll into the water. The waves immediately catch us, buffeting us against each other as we give our camera equipment one last check. Here, just beyond the barrier reef, the surface of the ocean has been whipped into a living grey mass that reflects the cast of a sky heavy with rain clouds. It's a far cry from the tranquility of the glassy lagoon. Swallowing back a bubble of seasickness that's sitting uncomfortably in my throat, I signal to Jared and we slide silently - and gratefully - into the relative calm of the blue.

Fakarava isn't a designated National Park, but the locals respect the wildlife and do what they can to protect it. Every boy when he is growing up, one said, learns how to spearfish from his father. He learns to shoot only what he needs to eat, and he never kills for sport. (Contrast this to a tourist family we met in Rangiroa. The parents had encouraged their three young children to try their hand at line-fishing, which they did with limited prowess - all they caught was a handful of aquarium-type fish, which are small and make for poor eating. Nonetheless, they displayed these poor creatures proudly in the pension kitchen, humouring their son who insisted, without knowing any better, that he would have them for dinner. We later found them discarded in the bin - such a tragic waste of life.)

The effect of the Polynesians' philosophy toward their environment is evident everywhere underwater. For one, the coral here is incredibly pristine. Fish life is also abundant, and subject to so little human interference that they remain unafraid of visitors. At one point a fish even comes so close that it looks like Jared accidentally kicks it with his fin!

We settle into the column of water and let the current take us along the reef wall. The bottom falls away far beneath us, maybe forty, fifty metres. We continue descending, and at thirty-eight, without noticing when or how, there are white-tip sharks swarming around us suddenly. They force their way between Jared and I, brushing by us then circling round again. These sharks are small - smaller than either of us - and all of them are female. This turns out to be a very curious observation because it means the sharks aren't gathering to mate. Neither are they in a feeding frenzy, as there's no sign of any Napoleon wrasses around, the other common predator in these waters. These clues lead us to the conclusion that the sharks are seeking protection amongst us; perhaps a larger shark passed by a few minutes earlier, sending the school scrambling onto the reef for shelter. 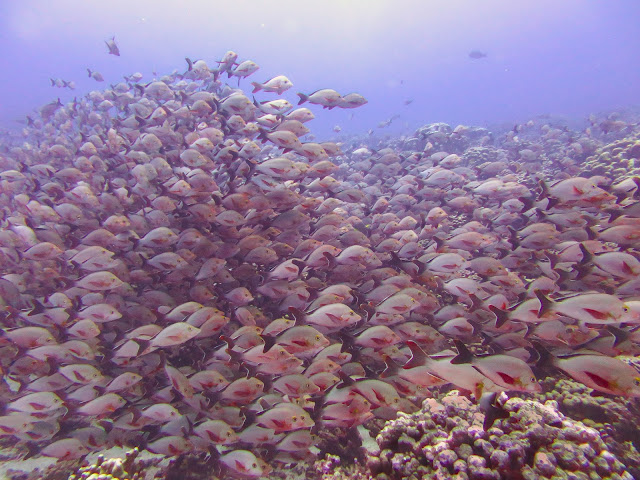 The current continues driving us along the reef, with schools of fish and cruising sharks taking turns to keep us company. The waters here are often described as "crystal blue", and it's not hard to see why: even on a day as gray as this the visibility is a cool forty to fifty metres, making it easy to spot the tunas, barracudas, giant trevallies and sharks that flit in and out of the blue.

With no lack of excitement on this dive, the time flies by. We follow the contours of the seabed and slowly head up, up, up, and I think regretfully to myself - ah, the dive must be ending soon.

But the current unexpectedly picks up and funnels us through a shallow canyon, and with a last woosh it deposits us at a little rise. We stay there for a few minutes observing a school of juvenile sharks, then Vincent beckons to us, come on. He slips around the rise and disappears down behind it. Jared follows; I have problems equalising so I fin after them, three metres above, cursing my ears under my breath -

when a strange undulation catches my eye and makes me stop short. Thousands upon thousands of fish, rippling and surging and swelling in an immense synchronised dance - the entire sea floor moving beneath me!


These, we later find out, are paddletail snappers, congregating in immense numbers to mate. They move almost as if they are a single living entity, each pulse its ragged breath; but the billowing ranks of snappers are careful to stay within the edges of the basin, for above them the sharks are patrolling their personal larder.

How aptly named, this dive site called Ali Baba's Cave! We dive it over and over, and every single time it blows us away with the sheer amount of life we see. It's a great reminder of how much we can - and should - protect if we all only learn from the Polynesian school of thought.