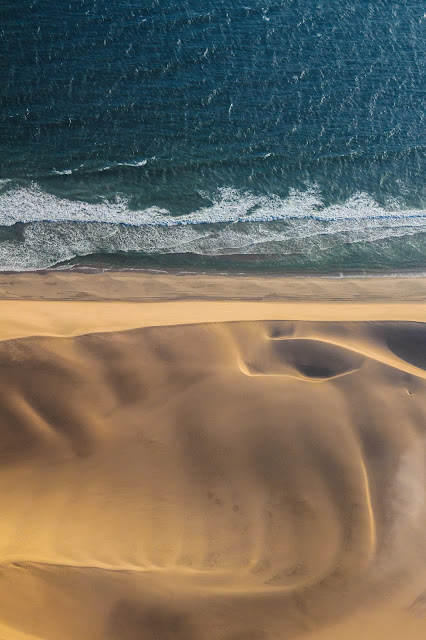 Namibia. Home to one of the world's least known genocides, a country bordered along the wild Atlantic ocean by an endless, inescapable swath of golden sand. Year by year this unrelenting desert pushes into the ocean, slowly staking its claim - the result is a series of shipwrecks stranded fifty metres inland, once, I imagine, bustling microcosms of activity, now skeletal and rotting away into the dust, one day to become indistinguishable from the sands that roil by and unfold into the horizon. These, together with the bleached, weathered bones of their human survivors, who had tried in vain to cross this most inhospitable barrier, gave rise to its present-day name: Skeleton Coast. 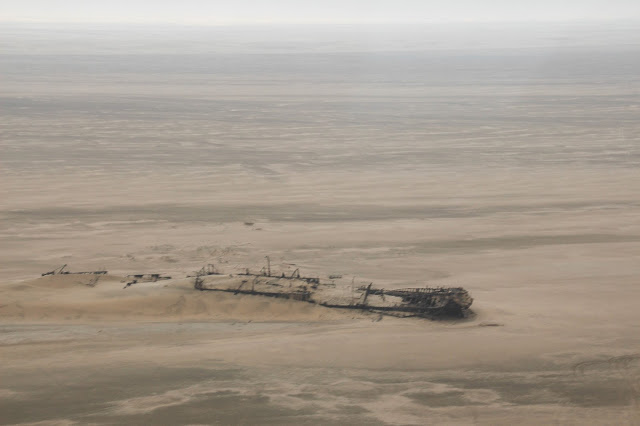 To be sure, the Namibia I see today - impeccably clean, full of continental cars on streets named after famous Dutch and German figures - came to be in part due to the Germans' presence. But cultivating a beautiful city is not the point of establishing a colony; there is inevitably something of greater mercenary interest to be exploited for the good of the empire. In this case, it was Germany's fatal attraction to its treasure trove of diamonds and slaves.

Unknown to the indigenous people who lived within the lush interior of Namibia, the land itself had been resisting the colonists for centuries. Since the 1400's, the Portuguese, British and Germans had tried in turn to enter via the Atlantic. But the thousand-mile long and hundred-mile wide Skeleton Coast proved to be impenetrable. The Nama and the Herero were insulated - for now.

Then, in 1883, a young German sailor landed on the shores of Angra Pequena. Angra Pequena was a small cove with just one permanent building, which belonged to an English trader who made his living selling oils he extracted from the livers of cat sharks. The cat shark was an animal profuse in the waters around Angra Pequena, particularly at a long narrow island just outside the bay. Fittingly, this was called Shark Island. It was later to become home to the world's first extermination-cum-concentration camp - and its fate, together with that of the thousands destined to die on its rocky shores, was sealed when the German sailor successfully struck a deal with a local chief for Angra Penquena and five miles of land surrounding it. The hoisting of the German flag over this desolate harbour, now renamed Lüderitz, represented Germany's first inroads to its African empire. 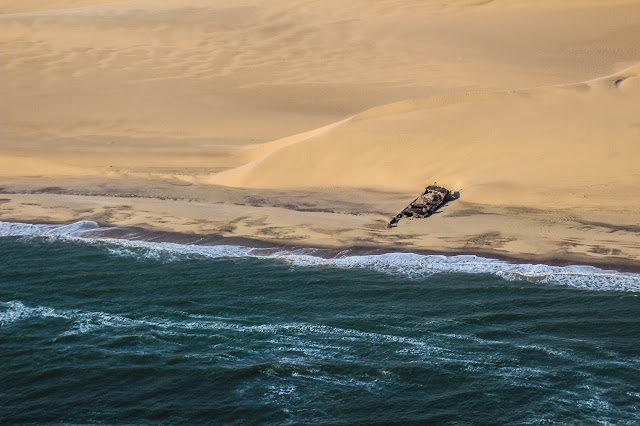 Over the next twenty years, four men from varying military backgrounds were dispatched to Namibia in succession to establish a German colony. The first of them was Heinrich Göring, whose last name must immediately be familiar to all of us today. We know it because it belonged to the President of the Reichtag, Hermann Göring, infamous for being the one who ordered the "Final Solution" against the Jews to be carried out in 1941. Heinrich Göring was his father. In retrospect, this was a dark foreshadow of what was to befall Namibia in later years.

1904 was a turning point in local history. General von Trotha arrived in Namibia, sent specially by the Kaiser back in Germany to quash a Nama and Herero revolt, which had arose due to anger and frustration accumulated from years of abuse. Von Trotha's response was swift and merciless. Not long after assuming power, he ordered an annihilation of the Nama and Herero, killing up to five thousand of them in direct battle and driving thousands more, including women, children and the elderly, into the desert. Scores of them succumbed to the desert heat, in some cases after resorting to drinking cows' blood as a last resort against thirst. 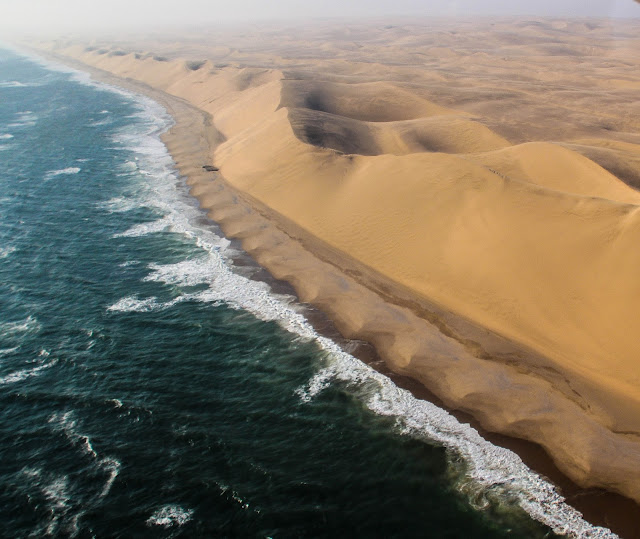 In the immediate aftermath of the battle, von Trotha issued a proclamation against the Herero. It stated that all Herero were to leave the land or face execution. This order, however, was rescinded because the German leaders back home saw the Herero as an economically viable source of labour, and at the end of 1904, a new order was given to herd the Herero into concentration camps.

At the same time, a new wave of academia was making its rounds in Germany. Called eugenics, it was centered on a set of practices and beliefs aimed at improving the genetic quality of the human race. Its biggest advocate was Eugen Fischer, and he propounded his theories by conducting medical experiments on the Herero prisoners in the concentration camps. His claims were later to form the cornerstone of Hitler's Aryan movement during World War II. 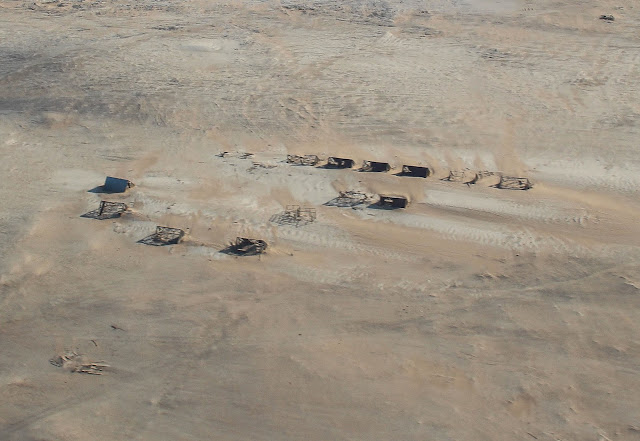 Today, flying over Skeleton Coast, it's not at all apparent the history these lands have seen. From this distance the undulating patterns look stoic - it's easy to lose yourself here in both time and space. I close my eyes for a second and imagine myself stepping foot ashore and facing these immortal sand dunes. What sheer desolation and desperation one must feel!

We pass over a collection of half-collapsed beams in the middle of nowhere, and the pilot dips his wings at them. Diamond camps, he yells over the roar of the propellers. Once upon a time, this desert held one of the largest surface deposits of diamonds; early German colonisers simply walked the plains and picked up diamonds glinting in the sun. Today these are long gone. Instead, it is the remains of the genocide victims that now lie interred at the outskirts of Swakopmund, a seaside resort town on Skeleton Coast. By some estimates a hundred thousand people were killed in those tumultuous years. Yet their stories are forgotten, their voices silenced and buried as if by the immense bleakness of this godforsaken desert. There are no memorials for the Nama and Herero (although there is one for the Germans in the capital city Windhoek), and even the locals side-step the issue almost apologetically. And as I cross Bismarck Strasse into Strand Strasse, I can't quite suppress the bubble of heaviness that wells up and out of me, floating down this little picture perfect street and into the sea fog that lingers at the edge of my periphery. 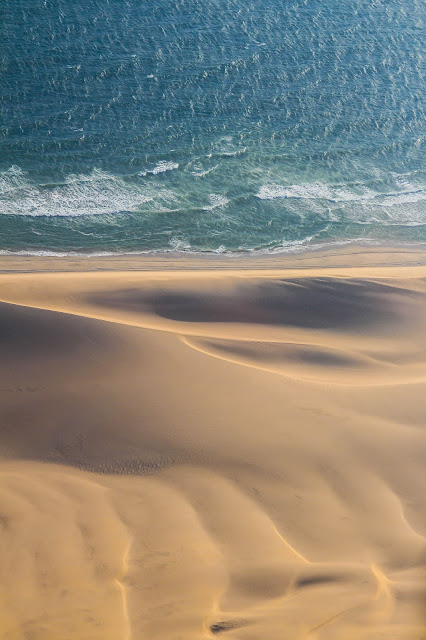 nice writeup, I know this place after I watched a documentary called Long Way Down by Ewan McGregor and Charley Boorman, not easy to reach this place.
Besides the coast any other attraction there? Was there other tourist that time?