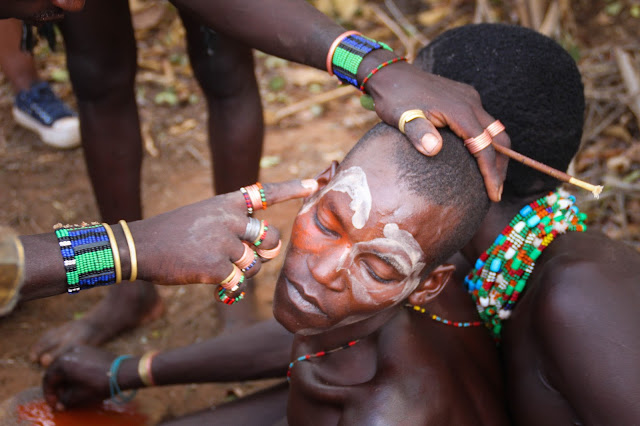 Coming of age is a significant milestone in many cultures around the world. This I know because MTV ran a programme that documented some very important observations on human nature, called My Super Sweet Sixteen (which I must admit I watched voraciously).

This milestone is so universal because it celebrates something we can all relate to: a person's transition from child to adult, becoming someone braver, wiser, stronger (and marriageable). The Sateré-Mawé tribe endures stings from bullet ants. The Jewish celebrate Bar Mitzvah. Vanuatu islanders bungee-jump. And the Bena, whom we visited in Ethiopia, bull-jump.

According to our guide, the bull-jumping ceremony is reserved for boys who want to get married, as well as boys whose younger brothers want to get married. He told us a story about his friend, who had become a Christian missionary, and who refused to partake in such a ceremony until his brothers begged him in tears to go through with it, because they couldn't get married until he did. 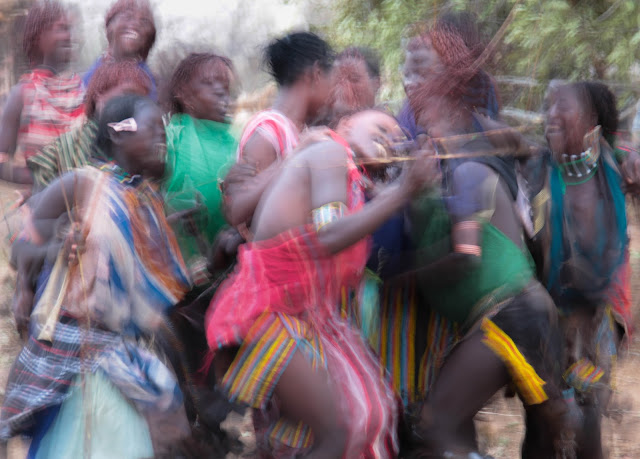 So, suffice to say bull-jumping is a huge deal. Relatives and friends journey from neighbouring villages, carrying food, coffee, and alcohol. The party easily lasts two to three days in a frenzied stupor of music and merry-making.

When we arrived at the party, we were immediately introduced to the star of the show, a sixteen year old boy whose countenance was a mixture of haughtiness and preoccupation. He spoke to us as if from a distance, his eyes never meeting ours, and he trailed off mid-sentence more than once. In part this was probably because English is not his first language; but more likely, it was because his mind was fixed on the task ahead.

"He must be a rich man's son," our guide said in jest, "So many people have come for his ceremony. A lot of people love him."

True to his words, people were streaming nonstop into the clearing, and the group of girls that was stamping out a catchy rhythm in the dust grew larger and rowdier (their cow-horn trumpets and silver bells created a cacophony of excitement that could rival any school sports club's) by the minute. The boy had spent the months leading up to that day practising his leaps; to fail in front of all these people would mean waiting another year to try again, and would be a very embarrassing affair indeed. 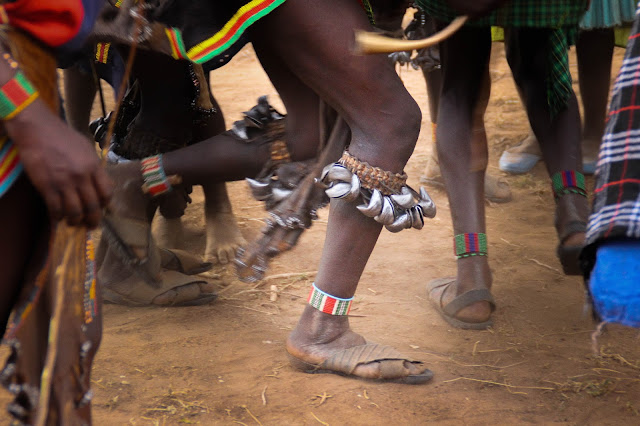 As the group of girls continued their strangly addictive song and dance, we caught sight of a few boys striding around the arena, carrying long birch twigs. "Maza," our guide called them, meaning the accomplished one. They were boys - I suppose I woud have to call them men now - who had already been initiated into adulthood. Their role that day was an important one. The girls had to be whipped to show their devotion to the sixteen-year-old - and the harder they were whipped, and the more blood drawn, the greater their show of love for him.

One of the Maza had softer eyes than the rest. He was quite a pretty boy, really. Though he was carrying a birch twig just like the other Maza, he didn't act like them. His lashes were gentler, less passionate, and after a while he quietly stepped aside to serve the elders coffee. We saw one of the girls he whipped touch her back and check her fingers for blood. There was nothing, and she shook her head in disappointment before picking up a twig and dancing up to another Maza, feigning kicks to aggravate him into hitting her.


All the while the girls were being whipped (there was a heavily pregnant girl who joined in too), a whole lot of other festivities were going on as well. The sixteen-year old boy was getting his face painted; the elders were drinking coffee in a large hut roofed with leaves; and people were passing large bowls of fermented sorghum alcohol around. Then the crowd shifted to a larger clearing some distance away, where there was a door frame made out of branches standing in the middle of nowhere. The boy, now stripped naked, sat underneath it as the elders performed a ritual to bless him.

We all chased after him, young and old alike; and alongside us ran a herd of about eight clueless bulls. On and on we ran - oh, it must have been at least six hundred metres over the rocks and dry brush - before imploding into another noisy, high-spirited swarm.

The bulls were pulled into the centre of a tightly-packed circle of people. There, they were jostled into line - shoulder to shoulder, each held in place by its horns and tail. I could see the whites of their eyes from where I was standing. This was the price these beasts had to pay for being such an important part of life here in Omo Valley, where wealth is measured not by money, but by lifestock. A Mursi man, for instance, has to gift thirty-five bulls (and a Kalashnikov rifle, if she has a brother) to his prospective bride's family. Each bull costs the equivalent of four hundred US dollars - so you can see marriage really isn't cheap any where you go in the world! 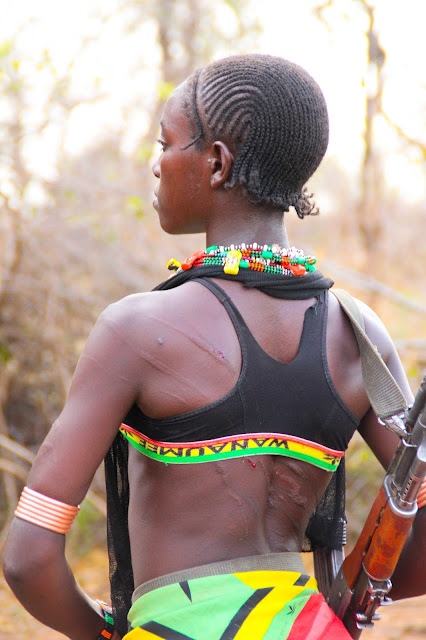 At a signal, the boy took off - he leaped onto the back of the first bull without difficulty, and the crowded responded with a roar of approval. With full concentration and a noticeable bit of wobbling he sprang from bull to bull. It couldn't have been easy to balance on their knobbly backs. At the end he did an about-turn and came back; this he did a total of four times, before jumping down amongst us again - no longer a boy; now, a man. 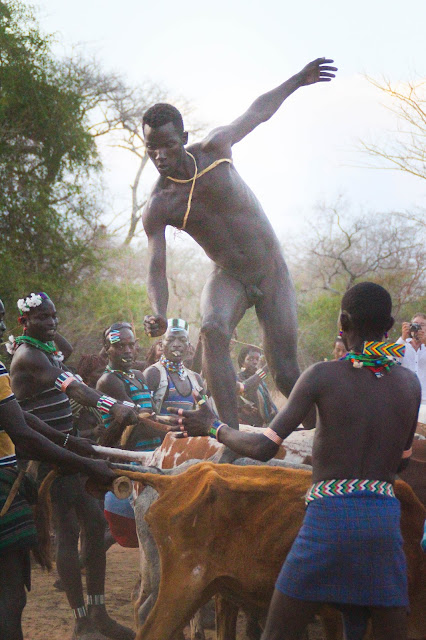