The journey to Etosha National Park from the capital city Windhoek was smooth until the back tire on our eight-wheeler unexpectedly blew halfway through. Changing it took the better part of two hours, which was a long time given the short winter days. At first we were tense, eager to regain momentum so we could make it to the park before nightfall, but after the first hour the anxiety gave way to acceptance. That's life after all, having to take everything in stride and dealing with it the best you can - and there's no better way to come to that realisation than under the unrelenting African sun. 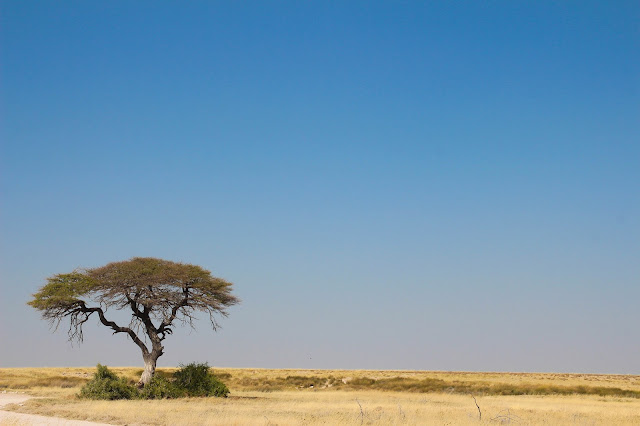 We made it to the gates of Etosha fifteen minutes before the sun disappeared over the horizon, so my first memory of the savannah is tinged with a resplendent orange glow. In that glow, silhouetted against the setting sun, is a lone elephant - he's not grazing, just standing motionless in the tall grass, and as we draw closer he looks at us momentarily then slowly turns away. 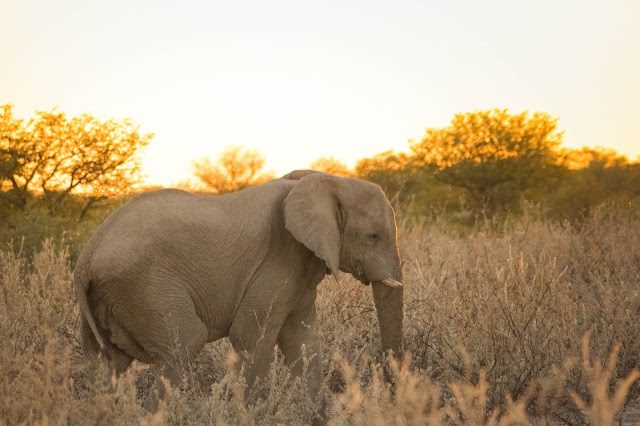 It's like Etosha's gates separate two disparate worlds. Outside, the land is mostly fenced up game ranches and farms, bisected by a single long road where you can drive for hours without seeing life, though there is no lack of discarded water bottles and cigarette butts littering the rest stops. But beyond the gates the asphalt abruptly turns to gravel and the fences disappear. The plains on both sides of the track are so vast and unsullied, and dotted with so many different species of animals, that you can't help but feel you've been transported back in time. This, I think to myself, must be what the world looked like long before Man arrived. 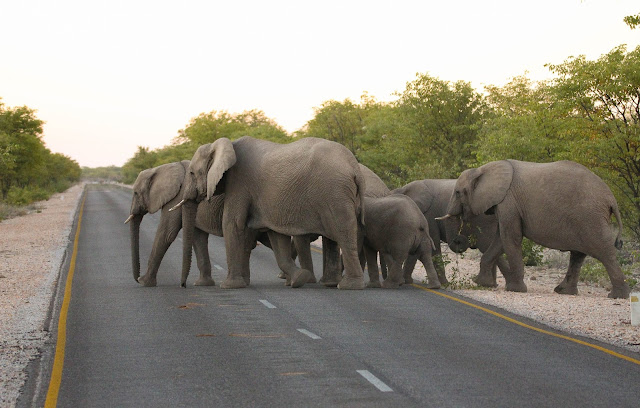 A few hundred metres from the entrance, someone gives a great shout. Elephants! We screech to a halt as a herd emerges from the trees and crosses the road (they didn't look both ways). They've almost all reached the other side, but big mama pauses and looks back, and a little one comes scampering out of the bush, ears flapping as he races to catch up with the herd. 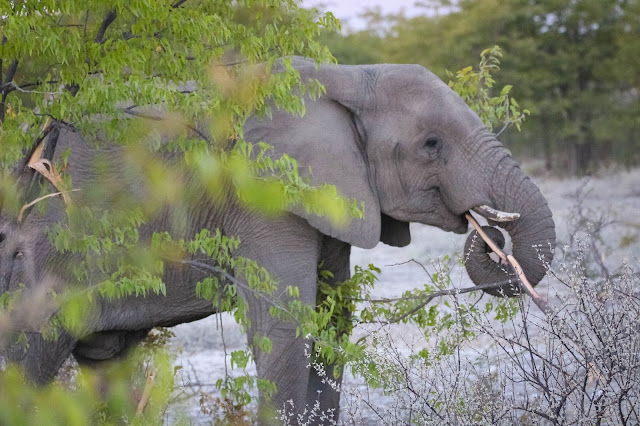 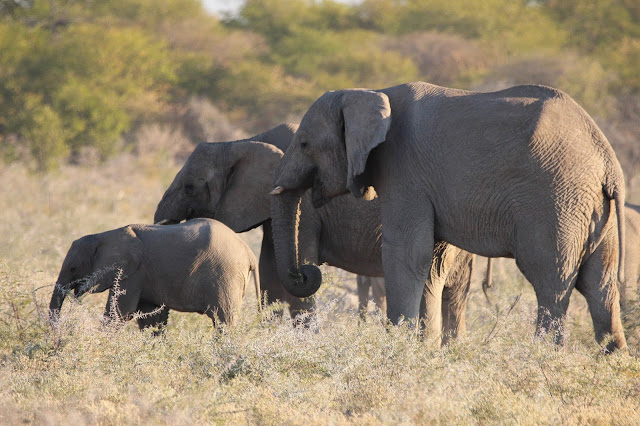 Such beautiful animals, elephants - and we were lucky to see over a hundred during the safari, with the biggest sighting at fifty-four in a single herd. Up north, we were startled to see two big white males, but it turned out that the colour was just due to the mud they use to coat their skin for protection against sunburn, which was chalkier than the one their southern neighbours use. Watching the elephants interact, there's no doubt that they're intelligent social animals. When they meet up, they always touch each other with their trunks in greeting. They also wait for their slower members, and you can tell the younger ones are having fun splashing about at the waterholes. 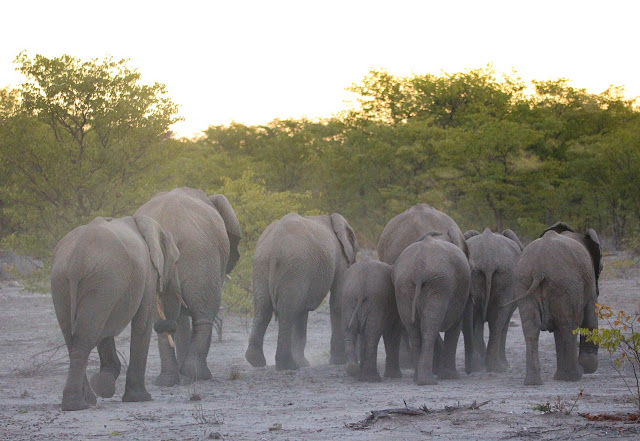 Giraffes, on the other hand, are kind of funny. They freeze in place when they spot you, although their heads turn and track you as you go by. The exception to the rule was this one baby giraffe who tried to get as far away from us as he could, his legs flailing in all directions as he broke into a run that could barely keep pace with his mother's slow stride. 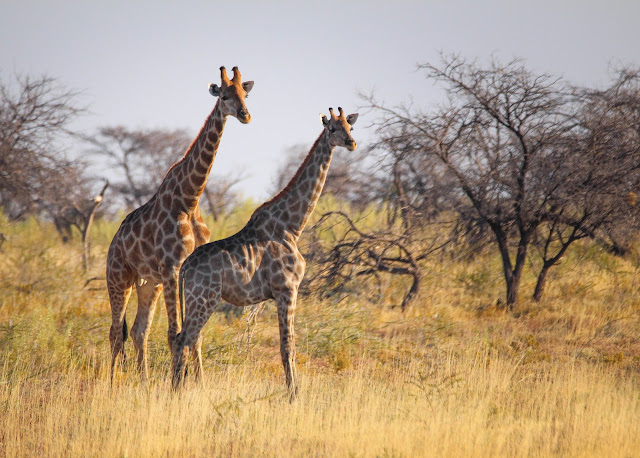 There's also the kudu, a type of antelope with the most graceful, curvy horns. You can tell whether the kudu is a mature one by counting the number of curves in them - there are four in the horns of adults. And then there's the oryx, whose face looks like some kind of kabuki mask. One loiterer at the doorway of the campground shower gave me a shock when I stepped out, still bleary from the cold morning temperatures. At night we also saw some bad-tempered rhinos at the waterhole, who tried to instigate fights with each other and the elephants. 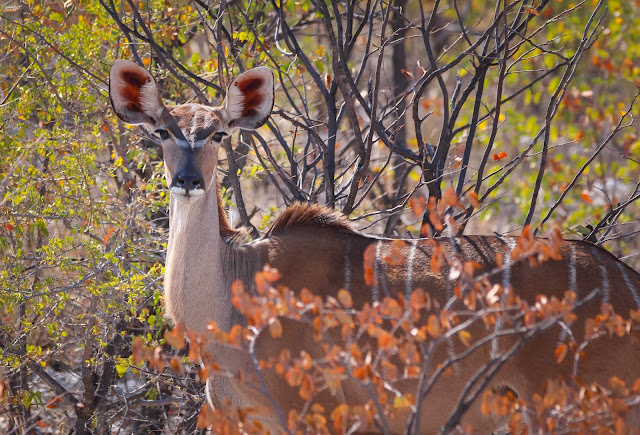 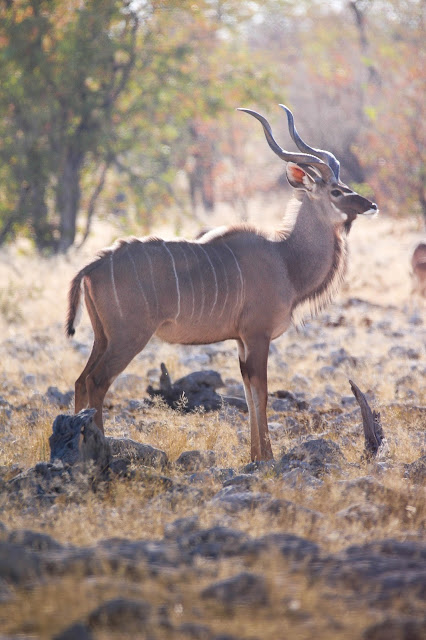 The reason why there there are so many animals in Etosha (although no Cape buffalo, the only one of the Big Five not found in Namibia), our guide explained, was because the authorities actively rounded up the animals that lived outside and relocated them in. It's as much for their own protection as it is for the farmers. As Namibia's population grows and farming activities increasingly encroach on the animals' territories, the number of conflicts between humans and animals rise as well. This is especially true with predators - the lions and leopards - who find easy meals in the farmed livestock. 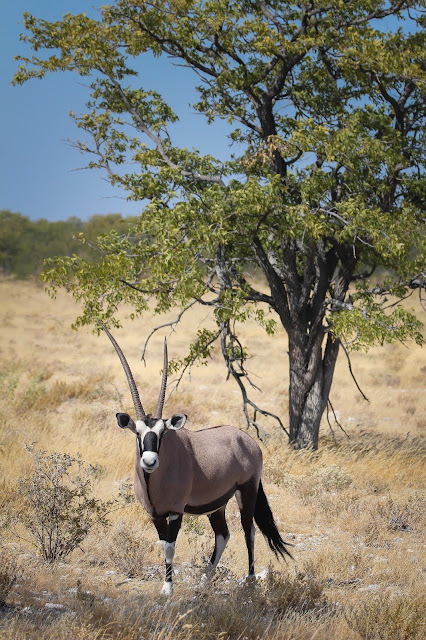 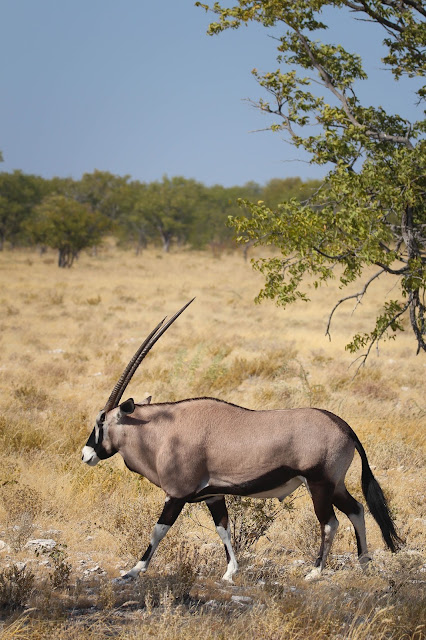 I won't forget our first encounter with the lions. Dad woke me up at two in the morning, face flushed, saying, I can hear them! He had been on his way to the washroom when suddenly, from somewhere beyond the edges of the facility, he had heard the unmistakable low throaty vocalisations of a patrolling lion. He hurried back to our tent where we sat and listened to the noises make a slow round along the periphery of our camp ground. I wanted to head down to the waterhole for a quick look-around (there's a viewing area that's protected), but prudence in the form of my Dad intervened, and we decided to stay in the tent instead. (I'm not sure how much protection the tent fabric would provide against a marauding lion intent on a meal, but in any case we took some solace in it and went back to sleep. Anyway, I jest - Okaukeujo Camp is a perfectly safe place; the only thing you are in danger of is having your socks stolen by jackals at night. They have the most annoying tendency of only taking one side.) 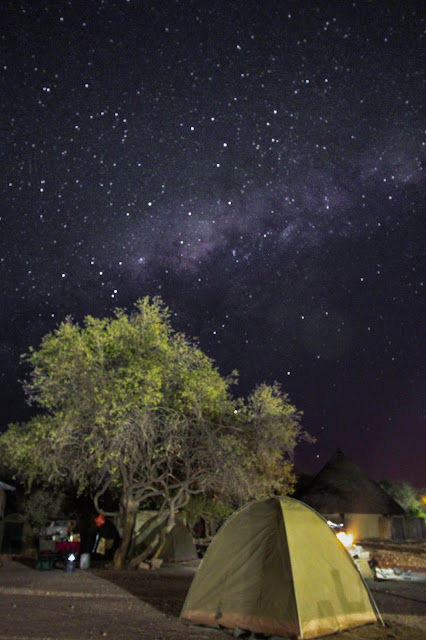 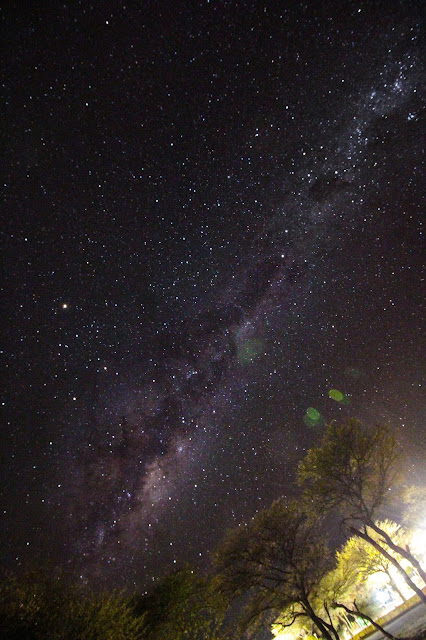 The next morning, as we drove out of the camp grounds, a fellow safari-goer waved us over. Lions, he said, five hundred metres ahead. You can imagine we didn't waste any time in making our way there. 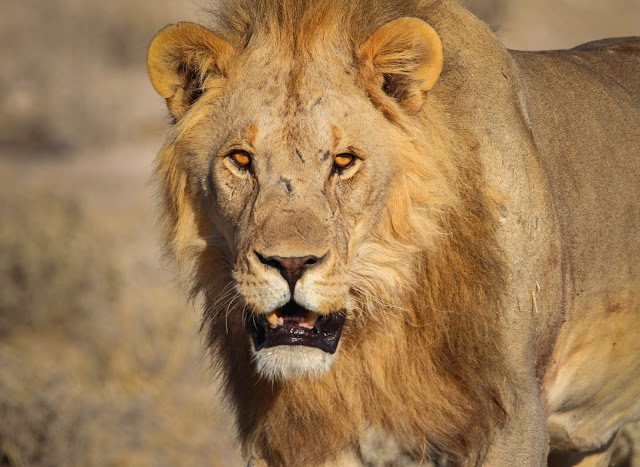 We found the pair, a male and female, without any difficulty. At first they kept their distance. One in front of the other, they weaved along the boundary between the plains and the thicket, occasionally disappearing behind dense patches of dry woodland, only to re-emerge silently seconds later. Slowly, leisurely, they got nearer and nearer to us. Through my camera's lens I could see their yellow eyes and the scars that formed dark shadows across the lion's face. (I gave myself a heart attack when the lions suddenly looked too closely for comfort - before remembering quite shamefully that I was observing them through my maxed-out zoom lens.) The pair ended up passing us less than three metres away, and when they did, they gave no sign that they even saw or cared that we were there, before stalking off into the endless horizons of Namibia. 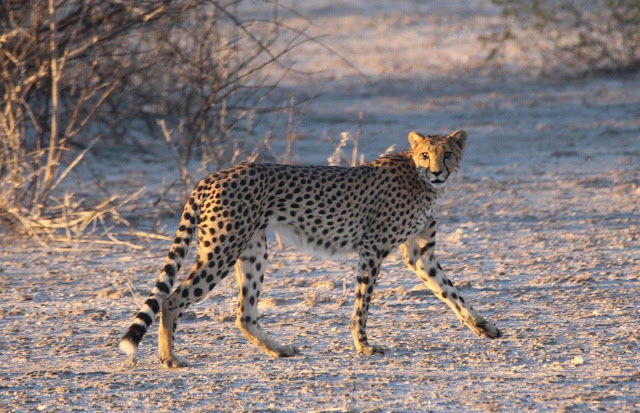 There were also multiple encounters with cheetahs, including three adolescents hiding from the sun under a tree. Then, on the last day, we saw a leopard. We were already on our way out of the park when we stopped to take a last look at a pair of giraffes, partly because of a small group of impala that was obstructing the road ahead. No one paid them much heed in favour of the giraffes that were doing their usual comic impression of a lamppost. Then someone turned back to the impala and noticed that in the span of thirty seconds, a shadowy figure had appeared and was sitting behind the impala. The guide grabbed my binoculars urgently. We go now, he said, there's a leopard hunting the impala. 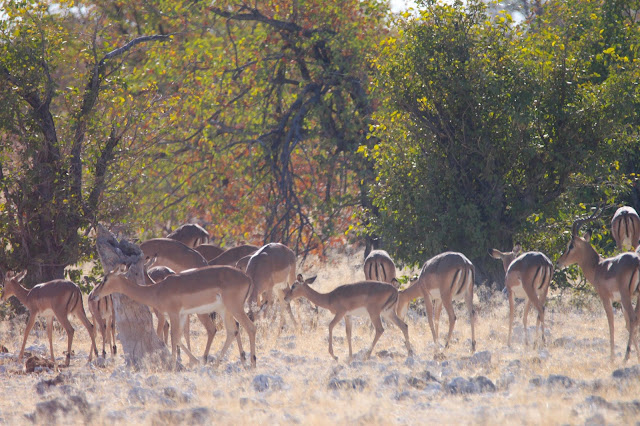 We had barely made any ground when suddenly the impala broke into a run, dashing into the cover of the shrubs on the opposite side of the road. In a split second the leopard was up and running as well, merging into the dappled brush after its prey. Through the gaps in the foliage we made out the shadows darting by -  first the frantic gait of the hunted, then the fluid movements of a larger silhouette. We don't know if he caught up, but what a high-energy end to our safari! And, funnily enough, we would never have seen the leopard if our tire hadn't blown again in the morning and delayed our departure. Talk about things coming a full circle - and maybe that's an apt metaphor to round up our first safari experience with. :) 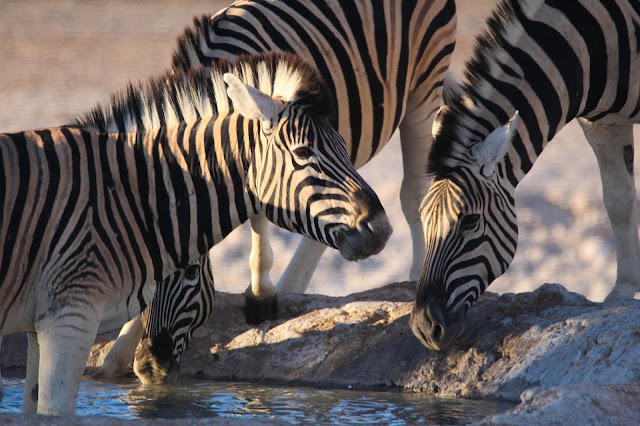 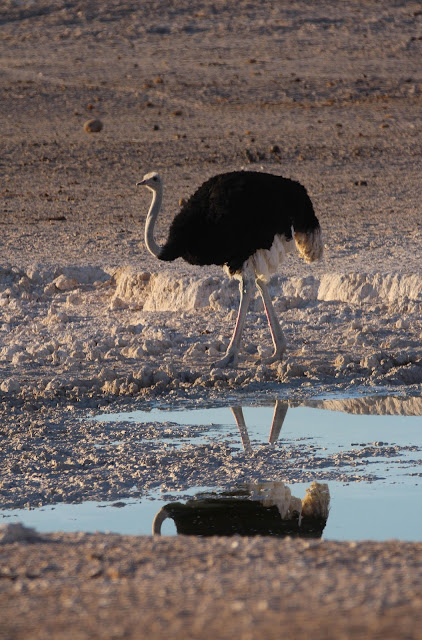 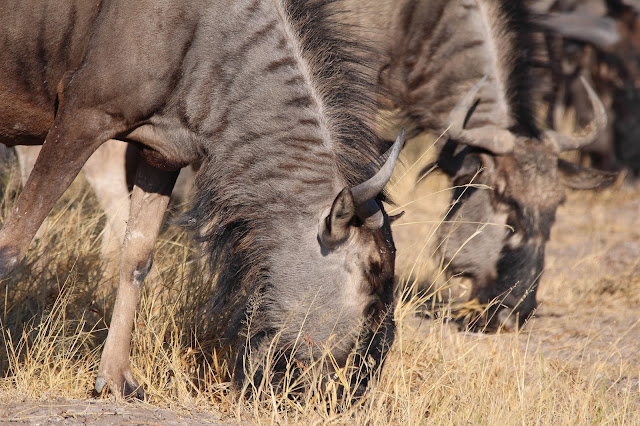 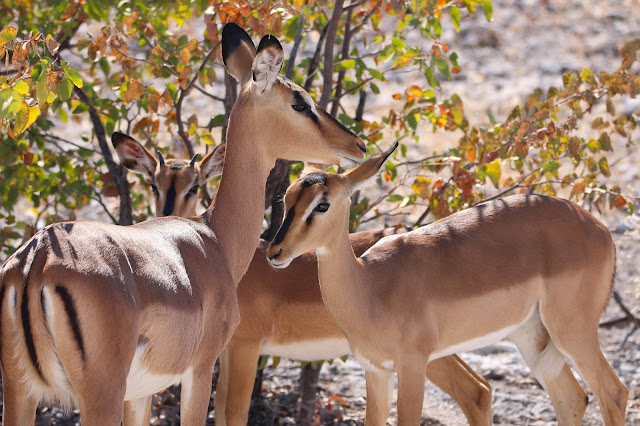 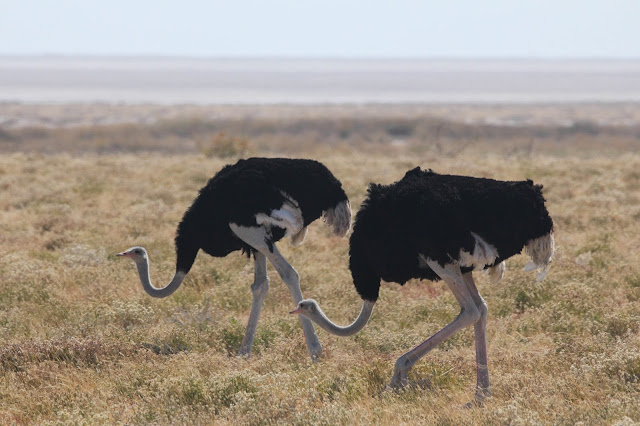 Hello Sarah. I discovered your blog through Instagram. I must say I love the way you tell your stories, which instantly carry me in thoses places like if I was with you... thanks a lot for sharing your experiences like that, it's quite rare to find people who like writing and who do it well :)
Cheers,
Mariette