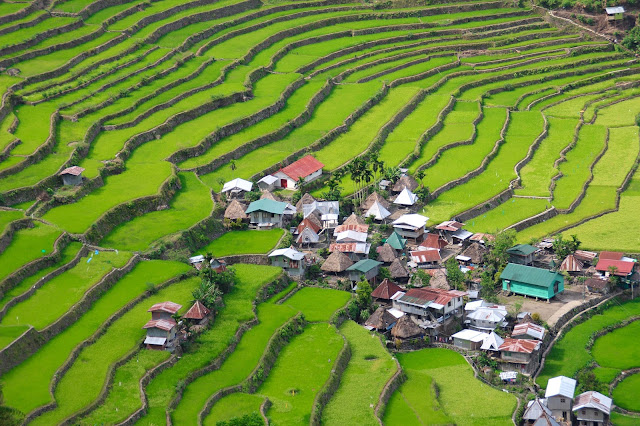 When I told my friends I was going to the Philippines to visit the Batad rice tuerraces, they laughed. "It's so you," they said. "We know you love rice, but isn't it overkill to fly somewhere just to look at it?"

"It's not that," I hastened to explain - but I couldn't find the words to tell them what exactly it was about the rice fields that were drawing me to them.

I've always thought rice paddies were particularly enchanting. Definitely scenic, with its hues of green and gold, and under the right kind of conditions, maybe even mesmerizing. Surely there's no other way to explain why I would take a four-hour flight followed by a ten-hour bus ride just to see them with my own eyes. Mesmerizing - I guess that's the word I was looking for.

"Oh, come friends and let us homeward take our way
Now we rest until the dawn is gray
Sleep, welcome sleep, we need to keep us strong
Morn brings another workday long

By the time I stumbled off the bus in Banaue, groggy and tense from the uncomfortable journey, it was dawn and fingers of sunlight had just broken through the morning fog. In the distance, beyond the edges of the town, blocks of emerald softened by this first blush of light stood half in the shadows of the surrounding mountains. It was far too early for the roads to be noisy - then again it didn't look like a town that could really bustle anyway - but I thought I could already see bent figures moving between the stalks of rice. 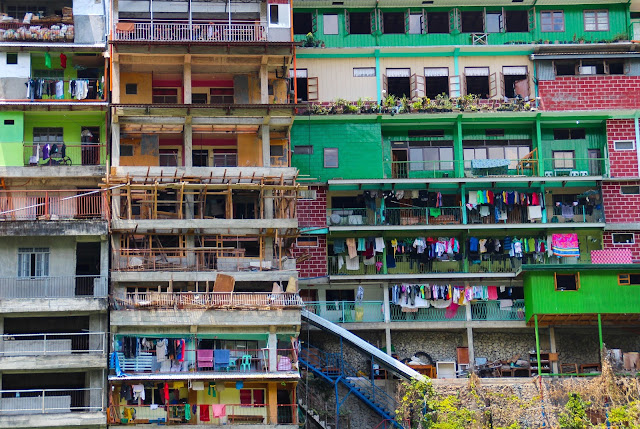 After a quick breakfast my guide and I started the drive out to Batad. The roads wound along the sides of mountains eroded by landslides, and more than once I caught myself purposely averting my gaze from the patches of bare earth and rubble, willing our trip safe and uneventful.

Eventually, the drive ended at a non-descript carpark flanked by stalls selling tribal dress. (Fun fact: the tribe that lives here used to be headhunters. In a nearby museum that displayed gruesome mementos of this lost era, including pot lids with handles made of human jawbones and photos of decapitated humans strung up like game, I eavesdropped on a guide as she relayed: "It was considered something to be proud of when a warrior won the head of a child. That's because he killed the offspring of his enemy - a much more poignant blow than killing the enemy himself.") 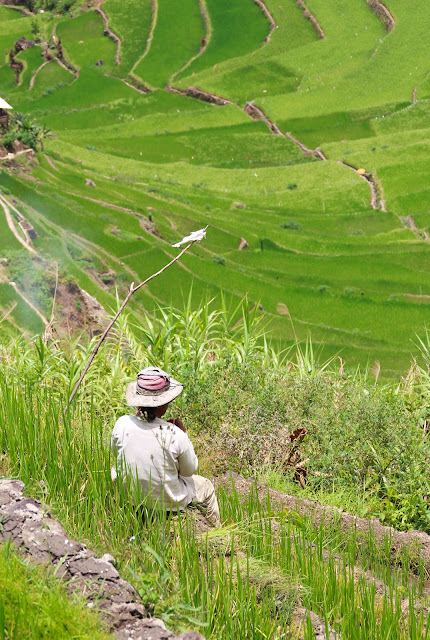 My guide beckoned me down a little muddy trail that cut through the woods. (It was election season so even here, in the most unexpected of places, the earnest faces of a dozen dog-eared candidates peered down at us.) This wooded stretch, perhaps four hundred metres in all, hides its secrets well. Here and there I caught brief glimpses of the famed rice fields, but for the most part the emerald rice terraces of Batad were tucked away in the midst of an unassuming mountain range - only as the mountains slid apart did they come into view, this undulating stairway to the heavens. 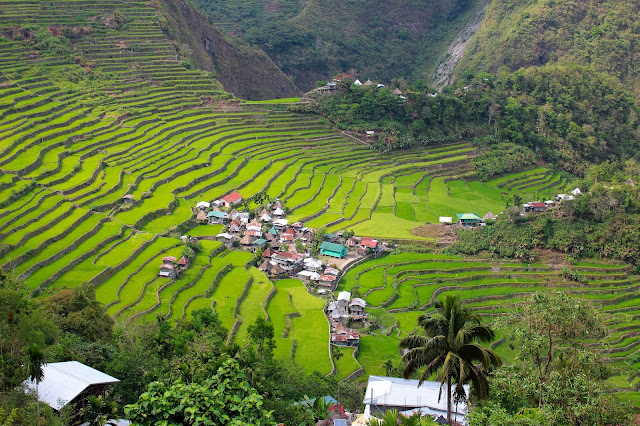 "Oh, my back is like to break
Oh, my bones with the damp still ache
And my legs are numb and set
For their long soaking on the wet.

Heaven in name, but oh, barely in spirit! Hiking up and down the rice terraces was an exhausting affair, and the narrow paths (which made balancing difficult) and high steps made short work of my legs. After the fourth hour my thighs were shamefully wobbly, and I gratefully seized the chance to sit and admire the scenery as often as I could. My guide later told me that we climbed the equivalent of the Empire State building three times over. To be sure, the mountain is not that high. But we spent an inordinate amount of time hiking from viewpoint to viewpoint, then detouring to a nearby waterfall before continuing our hike. 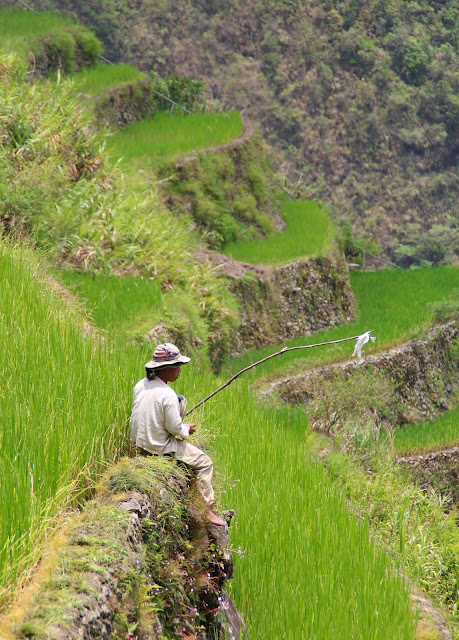 So were the leg cramps worth it? Heck yes. When the sunlight hit the rice paddies just right, the damp lushness shone with a vividness I had only dreamed of before. But more than that, it gave me a deep appreciation of the hard work that underlies each bowl of rice. They sure weren't kidding when they said rice-planting was backbreaking! 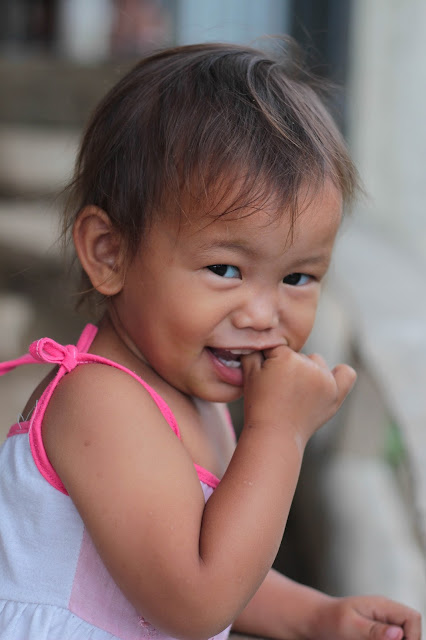 The Batad rice terraces were stunning in their own right - I spent over an hour at the top taking in the view - but there is another lesser known one that's just as beautiful. This one belongs to a village called Hiwang, and it's carved into a series of hillocks that stretch far into the distance. If you visit in the morning, as I did, the sight of the terraces cascading through the mist, and the sheer tranquility of its surroundings, will take your breath away - I wholeheartedly vouch for that. 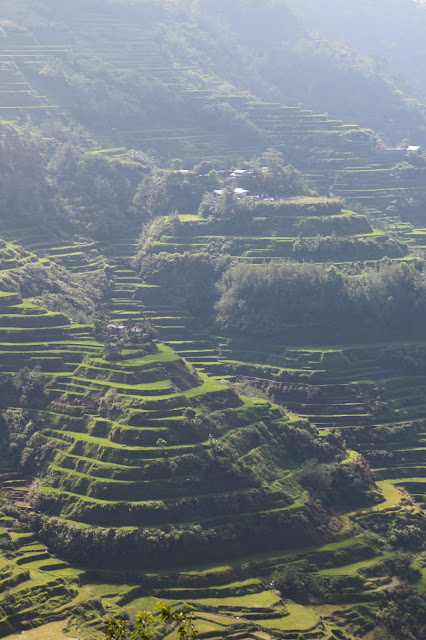