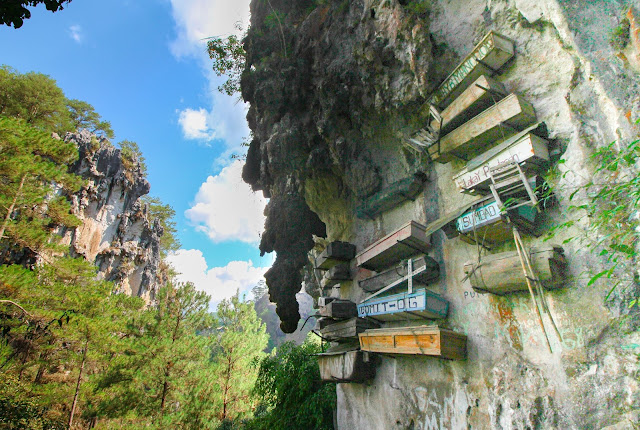 Banaue to Sagada was a six hour drive - or at least it was supposed to be, if not for the clouds that had turned into fog, and then into an opaque rain that slashed across our windscreen. Our car slowed to ten kilometres an hour as we inched across the wet and winding mountain roads. For the driver, a young boy of twenty-one born and bred in Banaue, I'm sure this was a stressful journey - he was leaning so far forward that his forehead looked like it was pressed against the windscreen, and he wore a serious frown on his face.

The hours wore on, and the rain petered out, and when we did eventually turn into the village of Sagada dusk was already settling over the mountains. My mind was already on dinner - when suddenly, something amongst the faraway limestone cliffs caught my eye. Before I could get a proper look it slipped away behind a row of houses, and as much as I craned my neck it didn't quite come back into view again. But in that split second - that dark mess of shapes, weathered blocks with faint vestiges of colour, so oddly out of place against the grey rocks - I knew exactly what I had seen. It was the famous hanging coffins of Sagada. 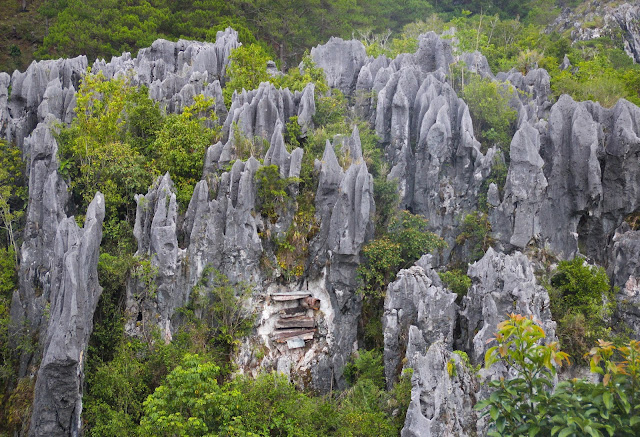 Well, not actually the hanging coffins that have become synonymous with the name Sagada. Those were a short trek from downtown, and they looked a little fresher with their coats of paint and names still visible on the outside. These shadowy ones I'd seen in passing - I walked back the next day to take a photo (above) - looked like they'd been there for centuries. Even at this distance I could tell that the wood was darkened from years of exposure to the elements. Yet, in testament to such puzzling feats of engineering, they still clung stubbornly to the cliffs. I wondered aloud if any had ever tumbled down, and the guide laughed. Oh yes, sometimes they do, and when there are floods sometimes the bones and coffins wash out of the caves as well.

See, Sagada is not just home to hanging coffins, but also burial caves. The region has a fascinating view of death, characterised by its seeming lack of aversion to it. In most parts of the world the sick and dying are hidden away, and even after someone passes we do our best to mask the pallor of death with make-up. Not so in Sagada, where the dead loom over the living. Trekking in the woods takes you past caves where coffins are stacked haphazardly and human remains lie exposed. Turn a corner and you might walk under a series of coffins pegged into the wall above. Another ten-minute hike away and you see a cliff face that looks exactly like the one the coffins are hanging on - except this one has rock-climbers on it, hooting in excitement. This is a village and a culture that has turned Man's ultimate fear into something completely pedestrian. 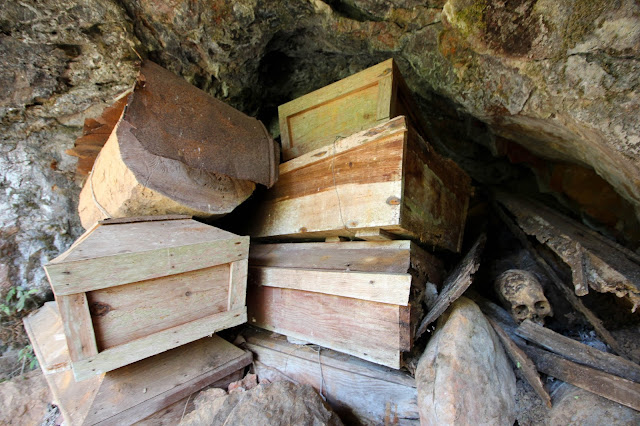 At least, that's how it used to be. There are only two men left, both very old, who still hold on to this tradition. The rest of the villagers call them pagans. The men are worried that they won't be sent off the way they'd prefer, the same way their ancestors have been buried for the past two thousand years, but there's nothing they can do about it. The villagers are all Christian and this tradition has become an alien practice to them. It's not hard to imagine why:

During the funeral ritual, the dead man is placed on a "death chair", his posture secured in place with lengths of rattan or rope. A handkerchief tied across his bottom jaw keeps it from going slack. The family keeps a pile of leaves smouldering behind his chair to mask the smell of decomposition, which gets increasingly stronger as the days go by. After a week or so, when all respects have been paid, the dead man is forced into a fetal position and wrapped in a blanket. He is then transported to the mountains, where the funeral party prepares the coffin and pegs it into the cliff. Finally, someone scales the cliff and presses him into a coffin far too small for an adult, necessitating the contortion of the body or breaking of bones in the process. 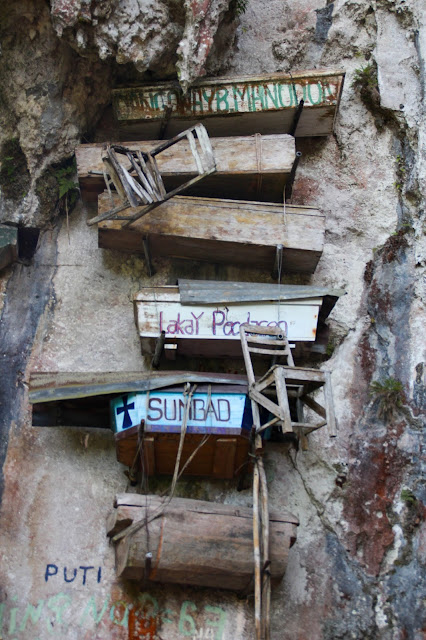 As I stood there looking up at the coffins, my guide gestured at my camera. Do you want me to take photo of you? he asked. There, stand in front of the coffin.

He laughed. Are you scared?

No, I said, shaking my head. Are you?

Would you do this?

No, he said again, picking his words carefully. I don't believe in it. I will be buried in a cemetery at the church, not in the open. I don't know why people would want to do this. But, he added as an afterthought, it's a good thing for our village. It has given many families jobs and money. He stood up. Come, I will show you more.

It's an interesting contradiction that plagues Sagada, a village that's straddling the the boundary between two different philosophies. And as ancient tradition ebbs with the changing times, perhaps its last and most enduring legacy lies in its ability to continue providing for the generations to come.